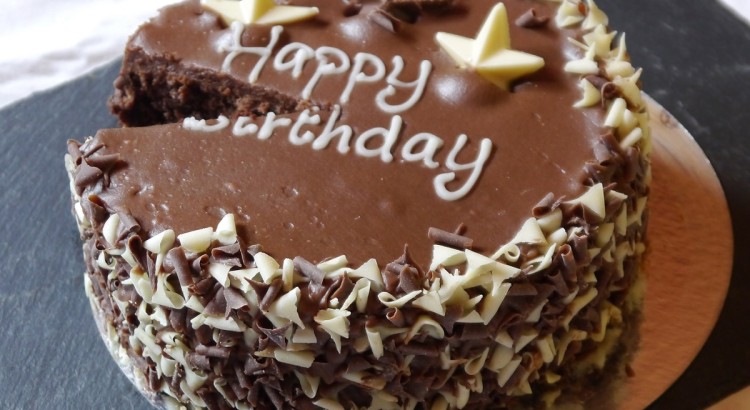 Yesterday, our baby girl officially became a teenager (although the metamorphosis started some time ago) and we were having her Grandma (whose birthday falls two days prior to our daughter’s) over for tea. One of the many genetic traits they share, is a penchant for chocolate cake. So having said in another post that I don’t generally bake, I make an exception on birthdays.

Rather amusingly, my mother-in-law arrived with a nice, shop-bought cake: the photographic evidence clearly shows you which was the most popular.

Sadly it also reveals my woeful lack of decorating skills so, if you want pretty, google it. However, I don’t recommend buying one as, generally speaking, factory baked cakes contain milk chocolate which does not have much going for it nutritionally speaking. Dark chocolate, however, is actually good for you (in moderation) and my recipe is packed with it which has the added advantage of making it richer, meaning you get a huge chocolatey hit from a smaller slice.

Dark chocolate (classified as more than 60% cocoa solids – I used 70% Green and Blacks) is loaded with minerals such as iron, magnesium and copper; has a good fatty acid profile and is packed with antioxidants. One study found that, on a gram for gram basis, dark chocolate had a higher rate of antioxidant activity than revered super fruits, blueberries and acai berries. Its high flavanol content has been shown to reduce blood pressure by a small, but statistically significant, amount and other studies link dark chocolate consumption to lower bad cholesterol in the blood and reduced incidence of cardio-vascular disease.

And my husband didn’t eat any, not because he was feeling virtuous particularly but more by virtue of the fact he doesn’t much like cake. I will be feeding the rest of it to the swarm of teenage girls descending upon us this weekend for the main celebration of our daughter’s birthday. Anyway, this recipe is totally delicious and here it is. 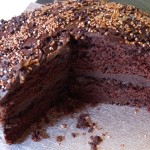 Diabetic Birthday Cake
I should point out that my back of the envelope calculation reveals a slightly higher calorific value per 100g in my cake relative to Misters Marks and Spencer (440cal versus 420), but I reckon you can get 16 slices out of my cake, giving a per portion calorie hit of 410. Which is a lot. But it’s a celebration.
Ingredients
Instructions
Share this Recipe