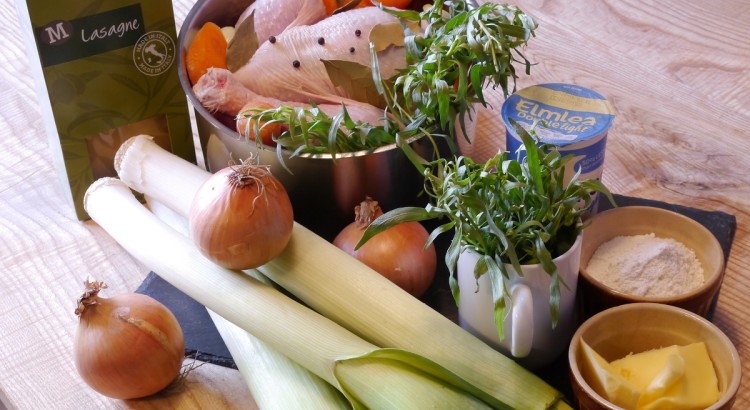 What with all the dreadful weather and short days, our highly energetic Westie is only getting a morning walk and by early evening is ready for a bit more exercise. I like to relieve the tedium of endlessly throwing a ball and retrieving it from under sofas by tuning into the Good Food channel. The other day, at the height of Storm Imogen, with wind and rain lashing against the living room windows, I watched Nigel Slater make a delicious chicken and leek pie and have been craving a slice ever since.

It would be unforgivable to recommend a pie on the site, as the calorie, saturated fat and carb content is ridiculously high and so it should only be indulged in as a very rare treat, perhaps after a 10 mile hike to a pub that serves a great pie! But this recipe has got all the flavour and only a fraction of the fat, carbs and calories of its pie equivalent. After a quick google of the nutritional stats for ready made puff pastry (as per Nigel’s recipe), one portion contains around 500 calories, 10g of saturated fat and 40g of carbohydrates. The corresponding figures for the quantity of pasta used in my lasagne, are 120 calories, 0,1g saturates and 23g carbs.

The ‘filling’ itself is loaded with onions and leeks and packed full of lean chicken meat and makes use of every last bit of a chicken, aside from the skin which the dog and cat very much appreciated. Infact, it is a great dish to make with a leftover roast chicken, although you will probably need to supplement the chicken pickings with a couple of chicken breasts which you can pop in with the bones and other stock ingredients which my recipe uses to cook a whole bird.

I had to make my roasted vegetable lasagne for the veggie daughters, who both nearly caved in when they smelt the chicken version, as I used to make this a lot in their meat eating days and it was a firm favourite. As for the principal dog walker (that would be me), as we move from endless rain onto the promise of arctic blasts (prime pie weather), my resolve to not eat pie is strengthened. With the first signs of bluebell shoots bursting through the soggy woodland floor on this morning’s constitutional, I can feel spring on its way….somewhere over the (forecast) snowy horizon. And then I won’t feel like pie anymore. Phew. And I’ve got enough chicken and leek mix to do another lasagne for the diabetic and me. 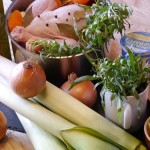