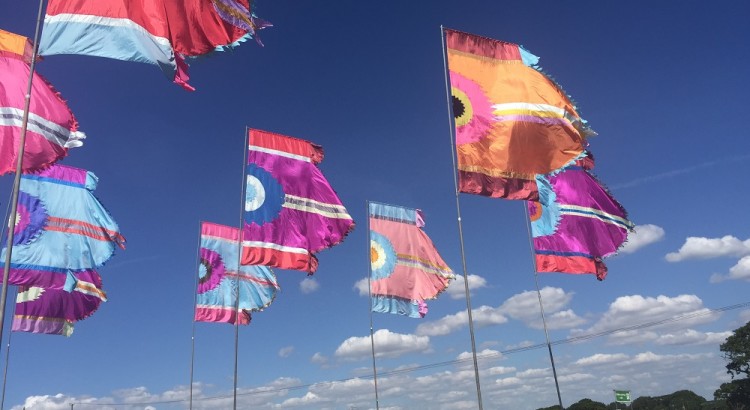 A few years ago, when planning our summer holidays, we decided to indulge in a summer of festivals. The kids were now old enough to enjoy a relatively high degree of freedom and independence (having been attending festivals since they were young) and we are just about young enough to endure weeks in fields (and festival toilet facilities) and still have a good time. As a family and with friends we camped and glamped at Camp Bestival, Boardmasters, The Green Man and Shambala. Some were favoured by the younger contingent and some by the older. But which of these summer festivals is best for the hedonistic diabetic?

Set in the beautiful grounds of Lulworth Castle in Dorset, this was the first of our festival adventures and generously provided the best of the weather! Very civilised, with an easy going vibe and a great line up of music which we all enjoyed. We danced for hours and walked for miles between the various venues, comfortably burning off many of the liquid  calories consumed! There was an array of healthy food available, with plenty of vegetarian options, and so it was easy to eat well. Most importantly from my point of view, as many of the festival goers were families with young children, the toilets were used respectfully and remained in a good state throughout our 5 day stay (although many of the tinies were fully paid up members of the wide awake club at dawn!) 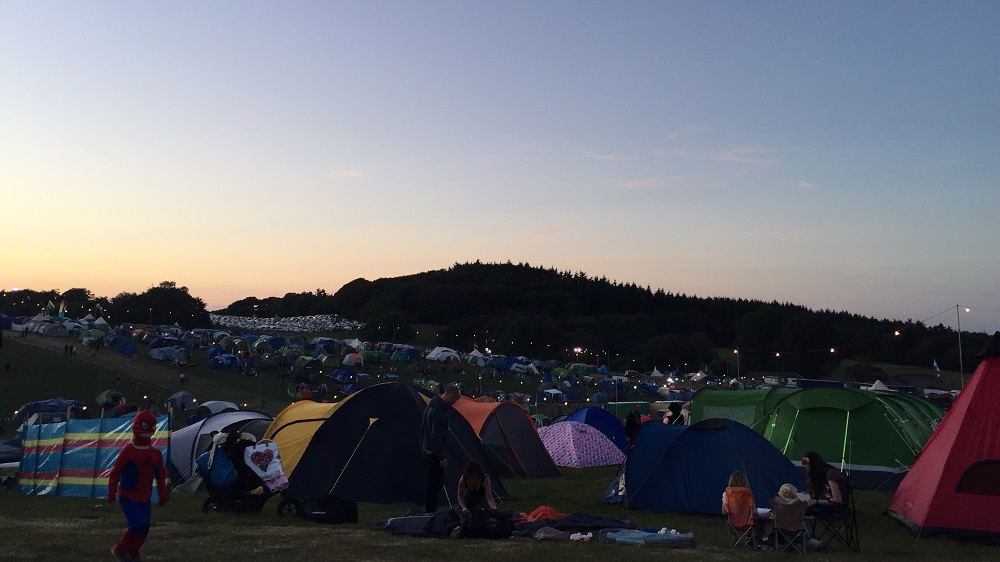 It was our first time here and we would thoroughly recommend it for young families. Probably not for those that don’t have any kids with them, especially if they are partial to a lie-in (though the teenagers and the husband were admirably able to sleep through the toddlers’ dawn chorus after a late night in a dance tent!)

And the highlight of it all, our girls meeting Kimberly Anne. 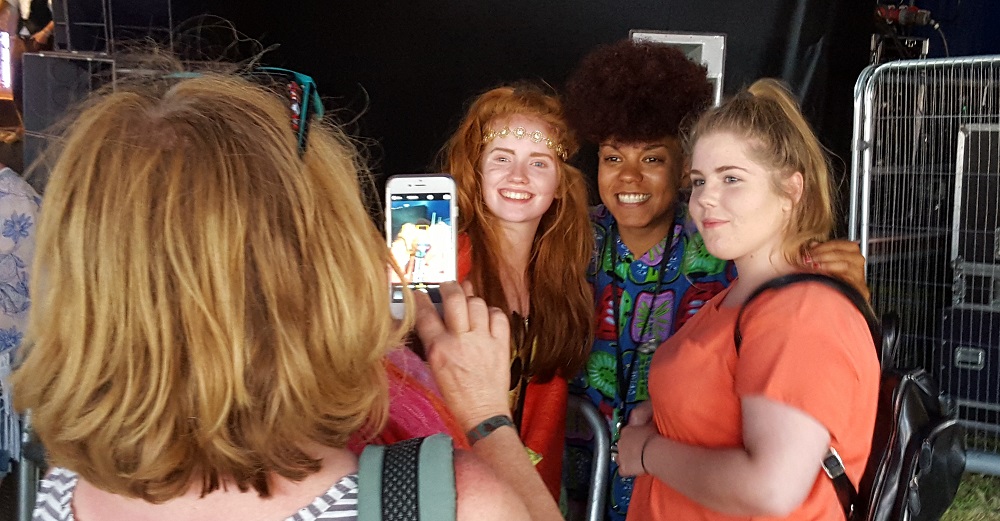 This was a great one for the teenagers but less good for the diabetic and his wife. The best that could be said for the food was that it was cheap and filling. It was somewhat biased to carbohydrates and deep fried protein, mostly of the animal variety, which meant we all struggled to eat well and I’m quite surprised the girls didn’t end up looking like a chip. 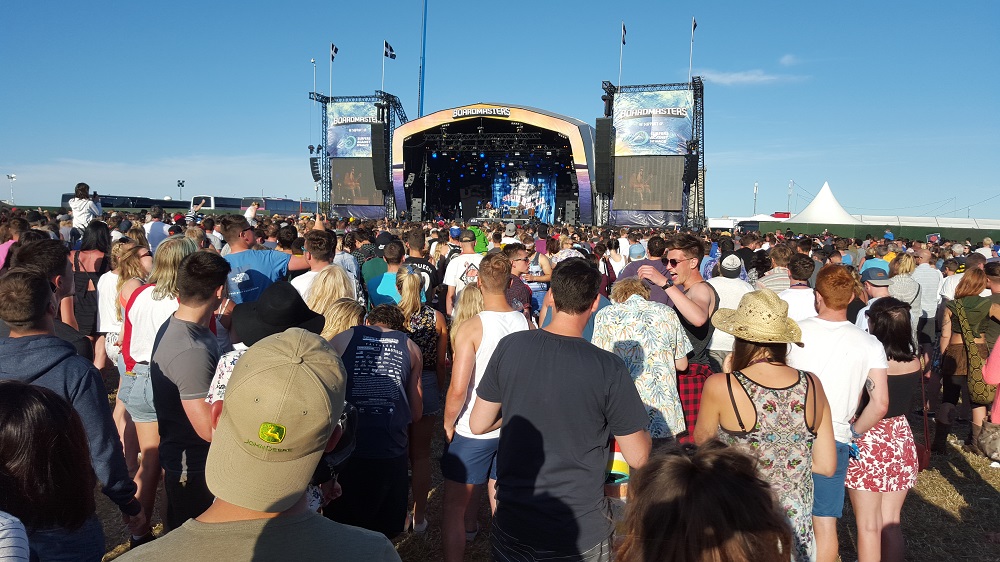 On the plus side, you can get the shuttle bus into Newquay, where there are some great restaurants, but once the music lineup began in earnest it was not viable to wrench the kids away from the main festival site. My husband was more than happy to get on down with the kids in the crammed mainstage arena and the dance tents, while I preferred to enjoy my book in the sunshine in the Corona field, which had a fabulous sea view, lovely chilled DJ sets and ice cold bottles of beer with a delicious wedge of lime (which was probably the closest I got to a piece of fruit!) 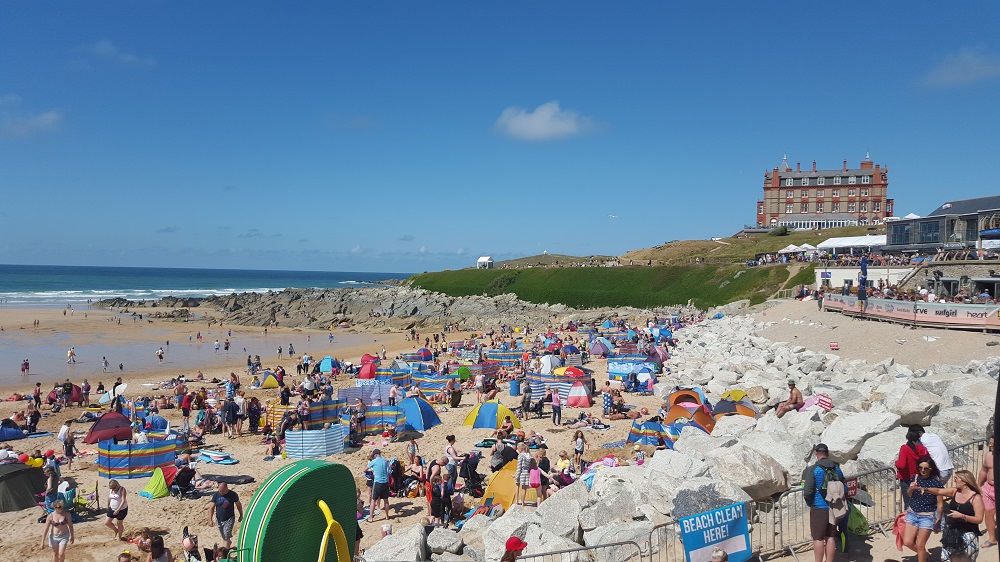 One of the unusual features at Boardmasters is that the camping area is across the road from the festival site which means there is plenty of catering very close to home. Here there were some better choices for the diabetic and, thank goodness, some civilised toilets, though we each had to pay for a weekend pass! Overall we loved the views, the beach and the music but liked less the food, teenage litter and the toilets. Oh my gosh…the toilets! 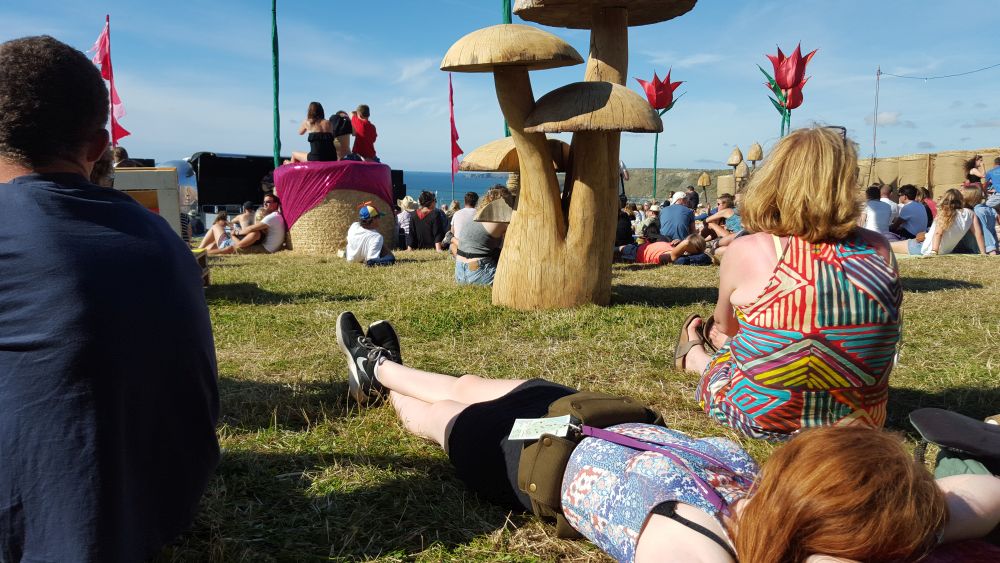 This is our local festival and we have been many times. The folk music lineup suits our tastes more than the kids, though there is plenty going on to keep them entertained while soaking up the fabulous atmosphere. And, the food is fantastic with lots of healthy and/or vegetarian and fish options to choose from. We thought the lobster shack was our secret but, unfortunately for the purse strings, our pesky-tarian daughters found it! 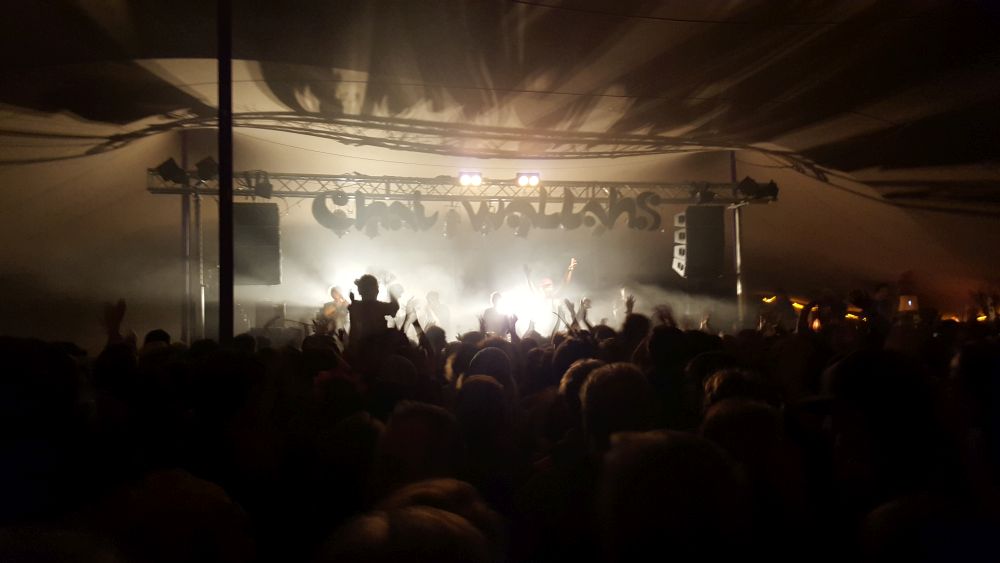 Our top tip here (and at Shambala) is The Chai Shop which serves the most amazing vegan food we have ever tasted, like this plate that included two types of daal, wholegrain rice, delicious crispy onion bhajis, rhaita and various chutneys. Yummy, filling and wholesome. We tended to share all of our meals, not to save money or cut calories, but just because there were so many amazing food stalls to choose from, we had to eat about 6 times a day to sample them all! It also helped to soak up the fairly constant stream of cider that kept appearing in our lovely, eco-friendly, refillable cups. 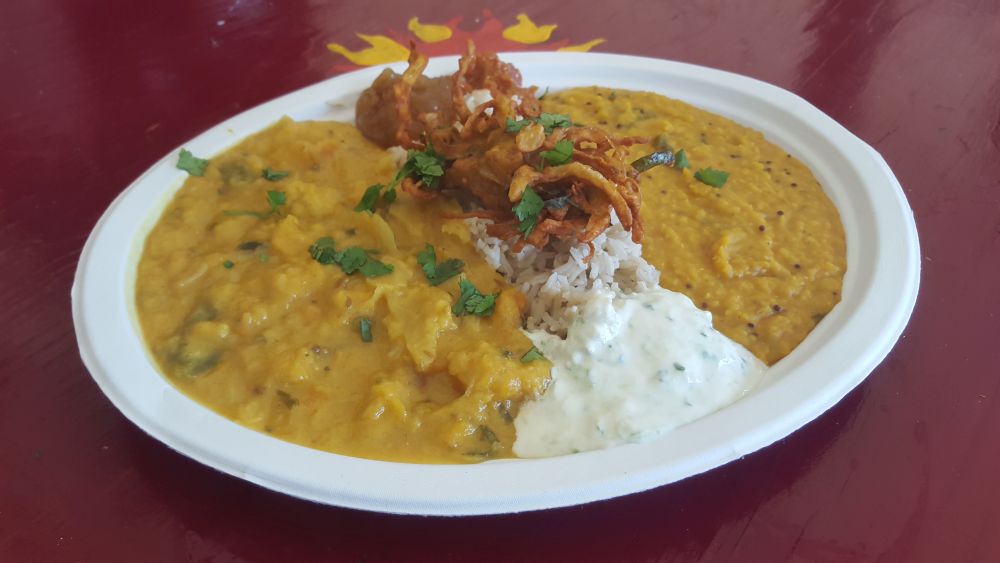 Overall this is probably our favourite festival. It combines all night partying (for those who want it) with good (but not great) music, diverse food and drink choices and a fantastically dramatic location. As long as you avoid the family field which accommodates the majority of the Wide Awake At Dawn Club, you can indulge in the odd lie-in too. The toilets are pretty good as well! Hip hip hooray for civilised festival goers. The weather was a tad Welsh, however. 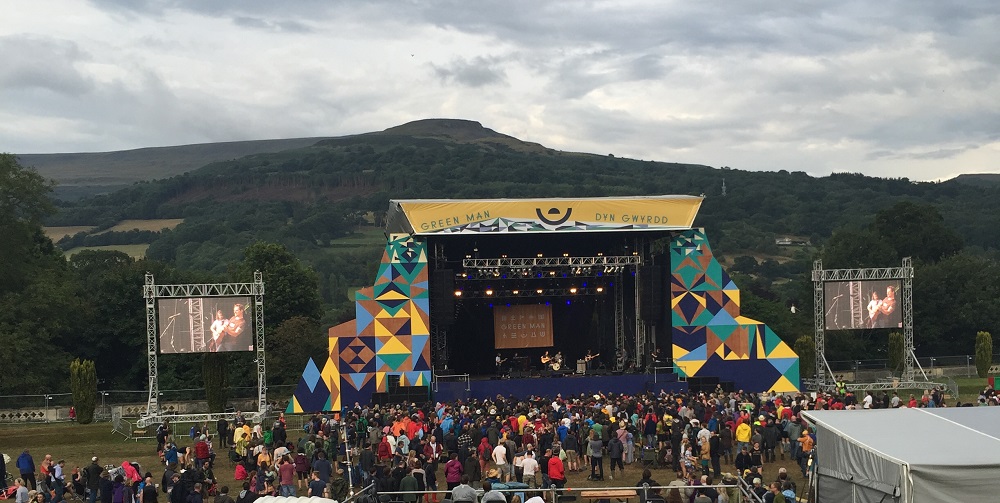 This was the last of our festival binge and it was our first time here: it certainly won’t be the last. The most loving and considerate of festivals, Shambala was less about the music and more about the everything else. We learned all sorts of dance and yoga moves in the sunshine, did thai chi in the drizzle and (totally unexpectedly) fell in love with poetry in the Wandering Word yurt. A happy accident as we sought shelter from a shower, we all became hooked on the amazing array of poetic talent that graced its stage. 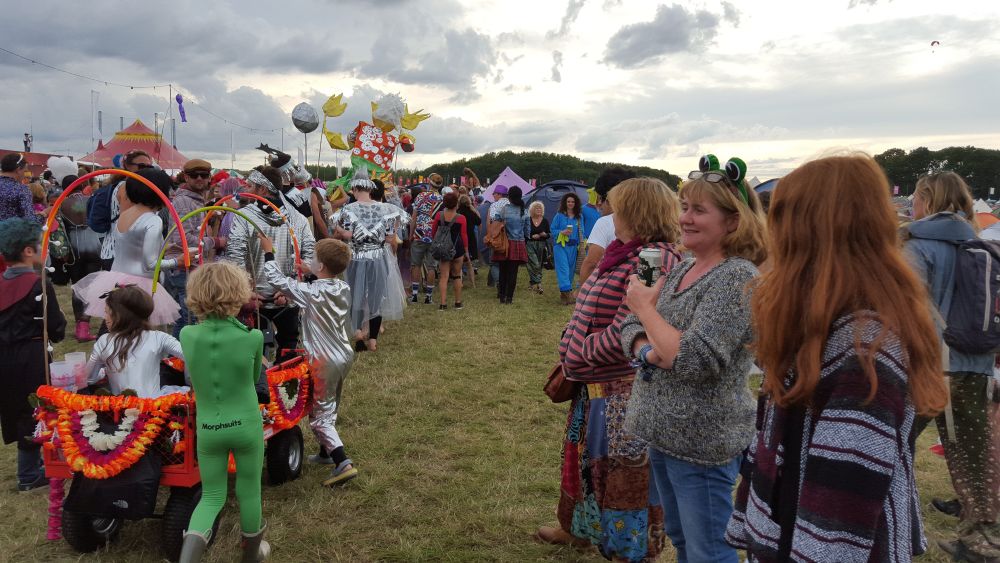 The food is fantastic but not quite as eclectic and perhaps a little less wholesome than at The Green Man. But the Chai Shop was there, so we were happy, and several places did a really mean Bloody Mary, so no worries about our vitamin C intake! Probably our favourite food find ( and one that we recommend all festival goers to search for) was Mama Muna’s Kitchen which served incredibly tasty, lovingly cooked and really wholesome food such as the amazing Billy Chief. Actually, it was Chilli Beef, but it was the diabetic’s 49th birthday and he’d had a few too many cocktails and artisan ciders! 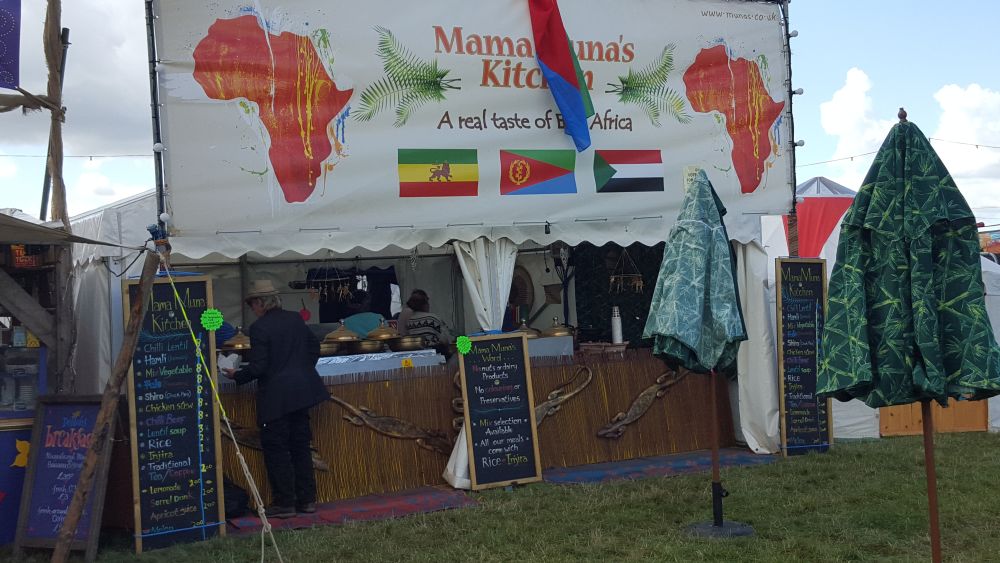 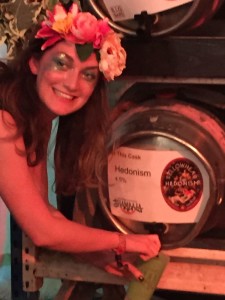 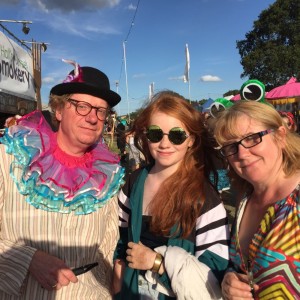 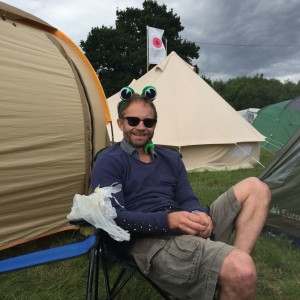 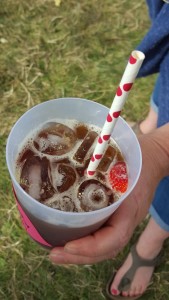 What a great summer! But which festival is best for diabetics?

Well, the food and drink is one thing, but it is also worth considering the amount of exercise that you get just from being at a festival. The figures might astound you. My husband’s android app measured the distance he travelled at each one, which does include dance steps, but I think it would be fair to say that his capacity to dance was pretty consistent and just as energetic as walking.

The longest distance walked/danced in any one day was 20.5 miles on the Sunday at Camp Bestival which burnt around 2000 calories! If we could get that sort of exercise in normal daily life it would go a long way towards controlling type 2 diabetes.

And the average distance he walked per day at the festival was;

Of course if you pitch a long way from the festival site you have further to walk. However, most of this daily distance is clocked up walking from stage to stage and bar to bar (not to mention the distance I am prepared to travel to find a decent loo) so it is more representative of the size of the festival site itself rather than your pitch distance.

When you take this and the availability of good food and drink all into account, the best festival for diabetics in our opinion is………………..GREEN MAN 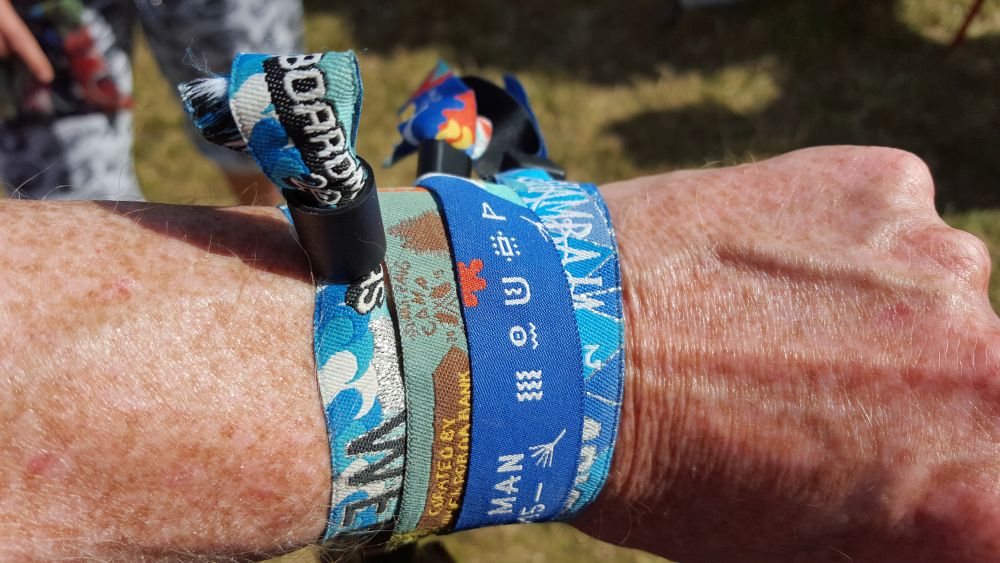 One thought to “Which UK festivals are best for Diabetic’s?”